The Town has entered into a contract to purchase a portion of the Pier property.  The parcels under contract include the Pier Building and the parcel west of the Building.  See the photo below.  It does not include the five parcels comprising the Campground or the large parcel where the old hotel was located.  These parcels are still for sale.  The purchase price is $3.25M.  The original contract contained  $25,000 Earnest Money and $25,000 Due Diligence funds.  Reasons given for the purchase include public parking, public beach access, and the Pier itself. 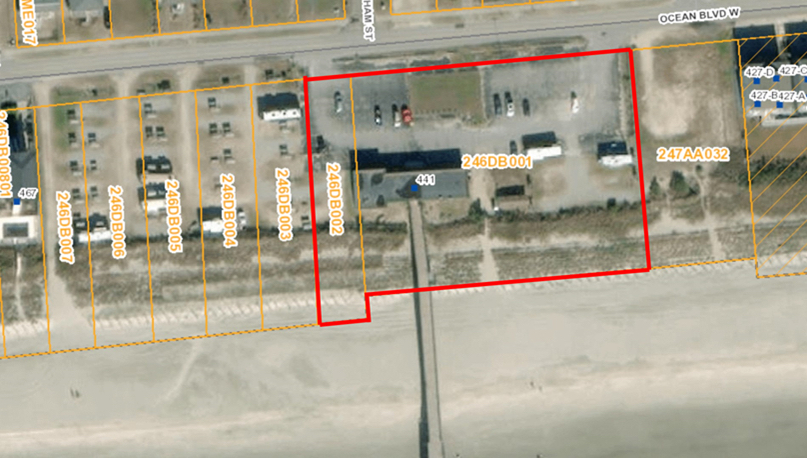 October 20 – The report on the Pier structure from the Town’s Beach Engineer, ATM, was released.  You can read it here.  Here is a summary of the report findings:

Applied Technology & Management (ATM) completed the due diligence assessment of the pier structure. The underwater inspection was very limited due to the sea state at the time of inspection (-3 to 5ft breaking waves) making it not feasible or safe to perform diving operations.  The assessment was also limited by the fact there were no plans or structural details, design criteria, technical and performance specifications, shop drawings, as-builts, geotechnical information, or wind/wave studies that could be located.

Overall,  the pier has likely surpassed its remaining service life considering it was constructed in 1957, which is ~64 years old. Most fixed timber pier structures are constructed for a 50-year life span with regular maintenance. Without maintenance records it is difficult to ascertain when key components such as the pilings were replaced.

Immediate repairs to the pier to extend the service life to a reasonable period of time (10-15 years) is estimated to be on the order of $500,000 to $750,000. This would include replacement or significant repair of the three damaged piles, replacement of the damaged pile caps, installation of new cross bracing and total replacement of corroded fasteners and connections. This estimate assumes that significant material such as decking and stringers can be salvaged, and the construction can be completed by land-based equipment (i.e., no mobilization of barges or water-based equipment).

One of the key concerns observed during the inspection was the heavily corroded and missing/damaged connection hardware throughout the pier structure. Nearly all visible connections are in critical condition and will require replacement.  A majority of the horizontal and vertical cross-braces are either missing, detached, or broken which is a critical condition for the structure.

October 1st – The Commissioners met on Friday, October 1 and voted to offer a new contract including an additional $50,000 due diligence paid to the Pier owner. The vote passed 3-2 with Commissioners Sullivan and Kwiatkowski voting Nay.   Commissioner Sullivan explained that the Town shouldn’t have to spend another $50,000 because the Pier owner sat on the contract from June 23 until August 7 making it difficult to complete the due diligence/inspection.

September 29th – The Commissioners met in Executive Session to discuss the inspection results. Read the Engineering Report – Building Assessment, the Systems Evaluation, and the Appraisal Report for the Pier Building.  The inspection report of the pier structure was not yet available.  The Commissioners voted to offer the pier owner a new contract which would move the Due Diligence period back until November 19th, after the inspection report on the pier structure is expected, and push the closing back until February 28th. A response was requested by noon on Friday, October 1. The Town would seek approval to finance the purchase from the Local Government Commission (LGC) at their February meeting.  This delay is what was requested by HBPOA.

September 28th – The HBPOA Board of Directors sent a letter to the Commissioners with a summary of questions and issues. Read it here: Letter to Town re Pier Purchase Issues.

September 21st Public Hearing and Regular Commissioners’ Meeting – HBPOA shared our position at the Board of Commissioners’ Public Hearing.  HBPOA Vice President John Witten speaks at the 3:21 mark.  At the meeting, Commissioner Brian Murdock shared that there is no plan of what to do with the property, that the inspections are expected to be poor and the Town may end up tearing it all down and selling it as lots for construction. He also noted that a tax increase or assessment may be needed.  Listen to his comments at the 2:32:00 mark here.

September 16th – 21st HBPOA sent a quick survey to property owners that we had email addresses for to verify that property owners agreed with our position. Over 82% of the responses said they supported the motion approved at our Labor Day meeting calling for slowing the purchase down until more information was available and a plan for the property was developed.

September 4th – The HBPOA membership voted to approve the following position statement at the Labor Day Meeting:  The HPBOA cannot support the proposed purchase of the pier properties until these items are known:

1) The inspection results listing any necessary repairs and their estimated cost;

2) The Town’s intended use of the property, including the provision of beach access;

3) A 15-year plan for the estimated revenues and expenses, including repairs, improvements, insurance, and operating costs;

NOTE: The HBPOA has never indicated that the members were not in support of the purchase, only that more information was needed before such a large and important purchase was made.  The worst-case scenario would be for the Town to buy the pier and allow it to become an abandoned, derelict structure while taxpayers foot the bill.  Unfortunately, without even a rudimentary plan that is exactly what will happen with property owners left paying for a decaying asset.

Many property owners have said they have not been to the pier in years.  Here are some recent photos.

The Town has contracted with ATM, our beach engineer, for an above and below water inspection of the Pier structure.  Their report is expected around the beginning of November.  The Pier building was also inspected.  You can read the engineer’s report here and the Building Inspector’s report here.  An appraisal was also done, which you can read here.

There are concerns about the Pier Structure and the impact marine borers may have had on the pilings.  Folly Beach, SC recently rebuilt its pier due to this.  An article on the issue is here.

Also known as shipworms, marine boring “worms” are actually mollusks and are the most destructive of the marine wood-boring insects. They enter timber submerged underwater and then grow rapidly once inside.

The Town will need to arrange a loan for the property.  In order to do so, they must get approval from the Local Government Commission (LGC).  When the purchase was first discussed, it was assumed that paid parking and revenue from leasing out the restaurant and ongoing pier operations would generate enough funds to cover the loan amount.  Upon further investigation that funding no longer seems feasible and Commissioner Murdock has said taxes may need to increase “a hundred and something” per year.  An assessment has also been discussed, see details below.  No information is available on operating and maintenance costs including insurance.

*Tax information:  Everyone’s tax situation is different.  This is not meant as tax advice.  Consult your tax professional for how increased property tax and/or an assessment would impact your taxes.