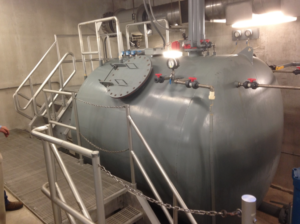 Are you aware that a wash-over could shut down the sewer system for potentially months?  This was a topic of discussion at the budget workshops in 2016.

If water were to enter the pump stations the pumps would have to be replaced, most likely along with the electrical system.  Some of these parts are ordered from China and would take at least 4-6 weeks to arrive.  The system would be repaired and tested after that.  All of the pump stations are vulnerable, but the stations at Greensboro Street (500 Block), the station in the 800 block and the station in Holden Beach West are especially vulnerable.  They are located about 30″ above the ground in some of the lowest points on the island.  The stations at Greensboro St. and in the 800 block are near the marshes that were historically inlets on our beach.  To understand how the vacuum sewer system works with photos and diagrams click here.

The pump stations are not watertight.   They are vulnerable to not only an over-wash but also a large “rainmaker” could cause enough flooding to knock one out.  Should the sewer system be non-functioning all the homes and businesses “upstream” would be required to be declared condemned by the building inspector due to lack of sanitary sewer.

The result of a sewer system failure could be catastrophic.   For property owners who rent their homes, many weeks of income would be in jeopardy.  Full-time residents would be forced out of their homes for an extended period of time.  Area businesses who make most of their income in the “100 days of summer” would be hurt if the problem occurred during tourist season.  For the Town, there would be a loss of BPART funds, but more importantly, it could impact the value of homes and the tax base on the island in the long term.   Potential buyers would weigh the vulnerabilities of the sewer system when deciding where to buy.  Other neighboring islands do not have this sewer issue.

What does this mean for me?

The Commissioners opted to get a second opinion and hired a local engineering firm to evaluate the issue.  Their report was presented at the April 2017 BOC meeting.

The Commissioners hired an engineering firm to develop plans to update the system, starting with Station 4 in the west end.   Construction should start Summer 2018.